Age Group: 35-50: This is the largest age group for plastic surgery & they want to slow down the hands of time with popular procedures such as: breast surgery, tummy tucks and lipo.

Posted by Everyday Living® at Thursday, January 31, 2013 No comments: 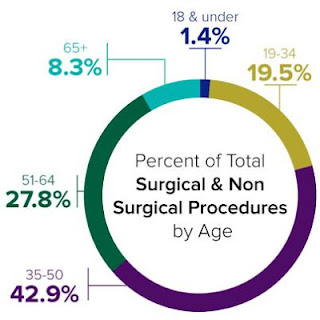 Posted by Everyday Living® at Monday, January 28, 2013 No comments:

Greensboro, N.C. — Having reached the end of a 10-month injunction barring it from selling its botulinum toxin product in the U.S., Merz is once again launching Xeomin for the treatment of glabellar lines.
Xeomin (incobotulinumtoxinA) was shelved in the U.S. in March 2012 after a federal court concluded Merz stole trade secrets such as customer lists and sales figures from Allergan, maker of Botox (onabotulinumtoxinA), in 2010. Merz was accused of collecting the information from former Allergan sales representatives, Bloomberg reports.
The Food and Drug Administration approved Xeomin in July 2011 for the temporary improvement of moderate-to-severe glabellar lines. With the court order lifted, Merz may now promote the sale of Xeomin with no restrictions. The product will join the likes of Dysport (abobotulinumtoxinA, Medicis), another rival for Botox that is available in the United States.
Posted by Everyday Living® at Tuesday, January 15, 2013 No comments:

A 10-month court-ordered injunction against Merz North America's product Xeomin expires today, the company said in a news release.
That injunction was imposed last March after a judge ruled that employees Merz had hired away from rival drug makerAllergan, Inc. (NYSE: AGN) had used stolen confidential information while with Merz. Xeomin is a competitor to Allergan's popular wrinkle-fighting drug Botox.
CEO Bill Humphries said the injunction was a "challenge" but Merz North America, which is based in High Point, has improved compliance training and continued development on a number of new products.
"Moving into 2013 our focus will be on sales and marketing execution in the marketplace, business development and licensing, and the organic expansion of our pipeline to better serve patients and physicians," he said.

Posted by Everyday Living® at Thursday, January 10, 2013 No comments:


In most skin care practices, about 10 percent of the Botox patients are men. About 5% of them want Botox for cosmetic procedures – wrinkle removal.

Undoubtedly more and more men are experiencing Botox. It has become something that is quite socially acceptable.

That does not surprise many medical practitioners because people, including men, are very concerned about looking and feeling young; if men know that they look good – they feel good, and as a result, men are eating better and exercising more.

Julia Randolf, the Skin Expert, tells you everything you need to know about Botox injections for men.

Get Botox Injections for Men with Wrinkles now!